If you want to choose the most unexpected thing in 2019, then it is none other than the Gucci 2019 SS. The invitation is a bag of spring-filled morning tea, which makes you think that it will be held in the quiet and quiet of the blooming flowers.

Arles is a small town in the south of France, but it keeps the chief designer of Gucci continually drawing design inspiration. This small town also made Van Gogh amazed and became the “punch” holy place of Van Gogh’s attractions. On weekdays, the town is full of casual dogs and lazy people. It’s hard to think of this as the works that Van Gogh created when he suffered in a mental hospital.

Gucci Chief Designer Alessandro Michele
It is this Beatles designer that looks like “three days without shampooing”, so that the current Gucci style and price have been completely renewed.

The daily life of Alessandro Michele

It’s strange and childlike, and it’s just that this makes the brains of ghosts so creative. Under the influence of the “Beatles” ghost designer, Gucci 2018’s image blockbuster did not hire a photographer at all, but asked Spanish artist Ignasi Monreal to produce a series of surreal digital works.

The intimate contact between Gucci and art
From the Renaissance famous paintings “Anofenni Couple”, “Ophelia”, “The Paradise on Earth” to “Sleeping Beauty”, the art can be found in the film. Ignasi Monreal is very interested in the content of the Renaissance. In his previous work for Gucci, he used the famous song “The Song of Dionysus” by Lorenzo de’Medici. Those “temples” are like the “treasure cabinets” in the magical story, which is full of the iconic Renaissance of Gucci.

He combines the styles of Greek mythology and Renaissance paintings, first turning static posters into oil paintings, and then making them into dynamic effects, which is the perfect embodiment of such surrealism. “When you travel to Italy, you will see that this country combines modern urbanism with a sense of history. For example, on the edge of the Bernini sculpture is the traffic signal sign, the whole city is full of popular and historical culture. ” 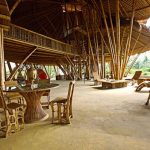 The Original Mistake Can Also Be So Beautiful: A Detailed Explanation of The Gorgeous Transformation of A Bamboo – Gucci Bamboo Shopper Leather

The Most Practical Matching Method For Black Suit, Gucci Help You To Be The Unique Fashion Devil